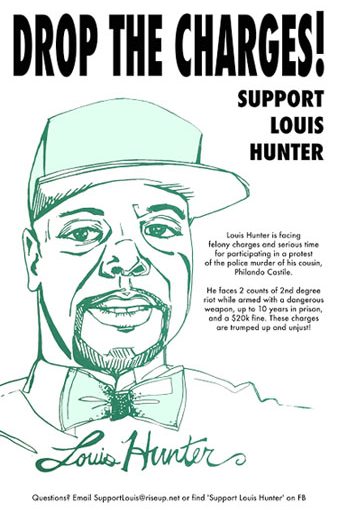 it’s been four and a half months since i posted. apologies, i’ve been a bit busy. my last post immediately followed the murder of Philando Castile. in the days and weeks following, there was an upsurge of resistance across the twin cities and the country. this included highway shut-downs, an occupation at the governor’s mansion and more. these led to hundreds of arrests. among these arrests was that of Louis Hunter, cousin to Philando Castile, who faces more serious charges than any other arrestee – 2 felonies and up to 10 years in prison. in the last few months, i’ve been working on his support committee as well as in collaboration with other arrestees from around the cities to stand in solidarity with him. i encourage anyone reading to continue to follow this case and support Louis specifically and the struggle against police repression generally. more information can be found here:

i’ve been working on several new posts that will be up in the coming weeks. now, as much as ever, we need to be rebuilding the radical left.

in solidarity and struggle